I have really been enjoying finishing UFOs, and am on a real roll with it! This quilt was a Rebecca Collins design using triangles and was a class sample (only a top). 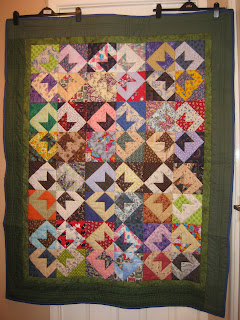 It was originally started at a class where we pooled all our fabrics. Darks went into one carrier bag and lights into another, and the idea was that you had to put your hand into each bag, and then put the resultant pair into a block! Scarey! However, I love the result, and the stars are clearly visible even though some of the block contrasts aren't quite as clear as others. I was going to meander quilt it, but then decided to quilt in the ditch, so the design would become even clearer. At the same time, I've been finishing my '12 Days of Christmas', which since I only managed to make 5 blocks, should really be renamed! 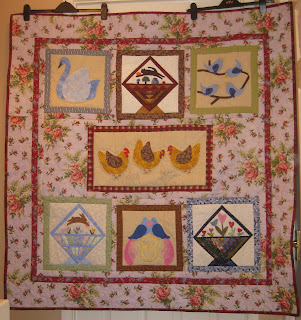 I've combined the Christmas blocks with the leftover Calendar Basket blocks - I think they play together pretty well. The photo has turned out rather brownish, but the border and binding are actually burgundy, and all this, background and backing fabrics came from my stash! Result!
But what about the partridge in a pear tree, I can hear you ask. Well, here he is. 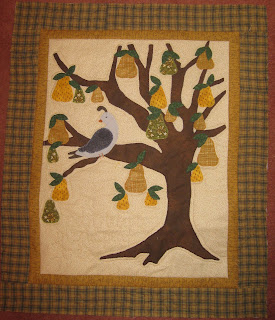 He's all bordered and quilted, and waiting for a binding. He'll make a nice Christmas wall-hanging, I think. What shall I finish next?!
Posted by Lynda at 17:00

i would love to get the pattern for that first quilt...i LOVE it! how sweet the design turned out with such random pieces drawn...very nice! and my, have you been busy...wanna come do some quilting for me :) have a fabulous weekend!

Sorry I would delete the above if I could, bleeping word verification Grrr